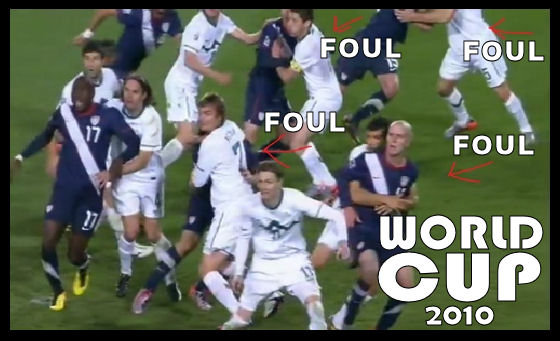 Editor’s Note — I spent 47 hours making the names of all the countries in JW’s awesome World Cup posts bold.  But then I realized fuck that.  So if you were coming here to see if YOUR country name was bold, then keep on walking.  Yeah, you too, Ghana.  Acadia

Screwjobs, Serbians Leaping to Their Death, Upsets, Break-ins, In-fighting and Brazil Being Brazil.

Ok, Let’s get down to brass tacks. You know what the first topic is; ESPN has been playing that non-goal like the Zapruder tape.

After the jump! US VS. SLOVENIA in Bullet Point Style:

SCREWJOB!~ Play resumes, the commentators are LIVID upon every replay. “Well I see something there – I SEE MICHAEL BRADLEY BEING FOULED” – Ian Darke, Englishman who is now the US No. 1 fan. I see it too – just look at the logo on the page, each foul clearly labeled. This ref, who was involved in A LOT of this game had an absolutely poor showing. I’d even put this in the top 15 worst ref jobs ever and this is coming from someone who watches more NBA games than anyone I know.

Ok, full disclosure: being that I know maybe three US guys (stemming from their appearances in the English Premier League), I’m not the biggest USA soccer fan ever. I’m not even the most patriotic person ever. Truth be told England is my first choice on the sheer basis of following the club careers of the guys on their team. But, for all that is said about US soccer, all the talking points about how the country doesn’t care, never will, etc. (hell I’VE even said this), it is disappointing that casual fans lasting memories of a sport that they may have been leaning on being a fan of gets a little sullied due to poor officiating and NOT the great efforts of the US team. This US team is very very good, with great goalkeeping in Howard and guys like Donovan, Dempsey and Altidore. Soccer, much like the NBA and the MLB gets caught up in horrible officiating from time to time. So don’t get swerved by the sport; just yell about the refs like any other league.

In what can only be described as a nervous and mediocre outing, England had few scoring opportunities and looked not very happy to be there, even though they chose to not let unlucky goalkeeper Robert Green start. They TIED Algeria 0-0, which is sort of like team Superficial Gallery (which WILL be a reality after this tournament ends) tying England. The summary for this team – they are afraid to fail because of the pressure they get from the press, the fans, the other teams in the Premier League that didn’t get in. Getting on the national team is like getting a really expensive gift that has a curse on it from some evil god. Here is a good metaphor for this team; they are the 2004 Lakers (Kobe/Shaq/Karl Malone/Gary Payton) that lost to the Pistons, they are the 2004 USA Men’s Basketball “Dream Team” that won the bronze, they may even be the 2002-2008 Yankees teams that were loaded with talent, great manager but didn’t come up as winners. So England tied again against a team that they should have beaten, and the FANS are livid, as well as the awesome English Press.

As if that weren’t enough, one of the 40,000 English fans in attendance managed to breach security and VISIT the team. Apparently though it wasn’t for negativity; it was just to say hello. “He didn’t comment on the performance, he literally walked in and said hello. It was a very personal conversation. He just walked in very casually, said something to me and then walked out. There was no scuffle, there was no aggression at all.” said David Beckham. Apparently Pavlos Joseph though has a different story. “I looked David straight in the eye and said, ‘David, we’ve spent a lot of money getting here. This is a disgrace. What are you going to do about it?’ I told them, ‘That was woeful and not good enough’. The room was so quiet, you could hear a pin drop. The players’ chins were on their chests – they looked pretty ashamed.”

Serbia vs. Germany. The Germans have been the heavy favorites after destroying the “Socceroos” of Australia last week. The coach blasted England’s play, the team strolls in with precision and skill and then they up and LOSE to Serbia or all people, now opening up their group, making the Ghana BLACK STAR SEX MACHINES a legit shot to come out of their group. Lost in all of the US/ref happenings was the funniest and almost tragic goal celebration ever. Milam Jovanovic scores the upset goal and begins to do the standard soccer celebration; running in some random direction with his hands up. He decides to run towards the stands where his countrymen and women are to share in the moment. He jumps the first barrier, then as he moves closer and closer decides to jump the second barrier…. which has a seemingly seven foot trench on the other side. THE MAN DROPPED straight down, making a great goal into something hilarious.

YOUR ABC network game of the weekend started off with the U2 (notice how U2 are the unofficial World Cup house band?) video package that told us that all the Brazilians do is BALL 24/7. Brazil is expected to win this tournament every year, Ivory Coast has the biggest weapon ever in Didier Drogba, with a healing broken arm and the entire continent of Africa on his back. So how did it go?

Well, The Ivory Coast got STOMPED. Brazil is one of two teams who showed up for this tournament (Argentina being the other), handling the Elephants (nickname for the Coast) rather easily. Fabiano scores twice, one of which was on a lucky handball as he took on FOUR Ivory Coast guys at once, Kaka played like the world’s best Steve Nash impersonator and 64 minutes in the commentators gave the whole “maybe some changes need to be made within the Ivory Coast so it doesn’t get to embarrassing.” If it were youth soccer the mercy rule would have come into play, as Brazil outclassed, outwitted and out performed. Here’s the game in 5 seconds; Fabiano scores, Elano scores, almost gets his shin kicked off, Kaka thanks Jesus, then gets TOSSED, other Brazil players hold up gear with their kid’s names on it and Brazil is now mathematically in the tournament, regardless of their match vs. Portugal.

North Korea has confusing sports reporting. Also, did you know that North Korea didn’t lose?. Yep, I got sources EVERYWHERE.

Deadspin has been doing these great goal recaps set to the cultural music of choice per goal scorer. This one is for the US/Slovenia game amongst others. Stick with it for the last one.

Your MARADONA VIDEO of the moment: MARADONA on Love, Heterosexuality, Dating Younger Women. You notice how Maradona is getting some coverage from other places don’t you? I’m not saying that I am responsible in a domestic way, buuuuuuut….

Many teams in this thing were supposed to do better than they are. Like France for example. Last World Cup they went to the final; this year they can’t do shit. Why? INFIGHTING, of course. Nicolas Anekla, a great player in his own right got into a shouting match. with French manager Raymond Domenech (with Anelka uttering “F***off, you dirty son of a whore”) during the halftime of the France/Mexico game, confirming rumors that Domenech lost control of his team. And of course what happens when your best player gets sent home? THE FRENCH REVOLT.

The New Zealand All Whites TIED the Italians in a game that sums up the entire tournament. The big teams are either losing, tying or barely winning and these scrappy countries are playing with ruthless aggression and going for broke. If this were a movie, it would be the same scene over and over, with the young plucky amateurs taking on the arrogant giants and coming OH SO CLOSE.

The world is now a 24 news cycle of useless updates so when something happens in any sport you can guarantee that it will be killed dead within a day. Knowing this, you will see the US/Slovenia “non goal” OVER AND OVER AND OVER again. However, other stories will be beaten into mush, especially when this has been the World Cup of strange matches and play. Story one has been the vuvuzelas and whether they will be silenced, or not. The second story are those Dutch Girls that were banned for wearing tight orange dresses that were supposedly an ad for beer. You’ve heard FIFA’s side of this, but what about the poor girls? Who is speaking for them and standing up to represent? I am fair and balanced, so here is the website in which you can “save the babes” by signing a petition.

What you should watch/record until Wednesday.

Spain/Honduras – Monday 2:30 P.M. EST. Spain got upset, try and come back against Honduras. Normally I would chalk this up as an easy Spain win, but this is the bizarro World Cup.

France/South Africa – Tuesday 10:00 A.M. EST. Re-read that above paragraph about the French. Who even KNOWS if they will show up? Will players start fighting the coach? Will France forfeit, throwing us to the ESPN South Africa studio where Alexi Lalas is so bitter and the rest of the experts hate him? It’s a total crap shoot.

Slovenia/England – Wednesday 10:00 A.M. EST. England needs a win, or every one of those guys will go home to a country that will burn them in effigy. Slovenia is the surprise first place team and wants to keep it that way. It’s a big deal all around.

USA/Algeria – Wednesday 10:00 A.M. EST. That’s right, the biggest two games in the group happen at the same time. Like England, the US needs a win to move on. Like England they need not risk a draw and get caught in the horrible mathematical equation to settle it. If both the US and England win they move on. if they don’t then it gets real confusing. If the US doesn’t get in a hole early they got it in the bag. If they do get in a hole early? CLIFFHANGER!