World Cup 7 – The Group Stage is Done. The Knockout Round Begins. 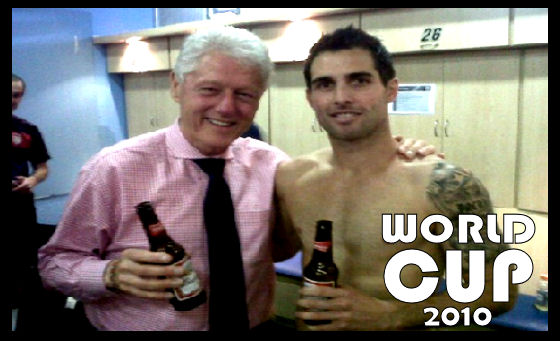 After a flurry of days in which roughly seven million games were played, by the time you read this there will be no more group stage and the knockout tournament will begin. Let’s talk about some teams.

The United States: With former president Bill Clinton watching their games and “praising their persistence”, American Hero Landon Donovan crying after the big win the USA is all about being a Hollywood story, coming from behind to win the game, hanging with any team and basically being the friendliest, most user friendly team of the summer. They’re like team internet in a way; every blog is doing these ultra positive posts and even SPAIN is giving them respect.

The USA guys are like a sports team combined with your favorite ensemble movie come to life. Herculez Gomez is on the Twitter like an excited boy. Tim Howard is your super intense goalie who never even wanted to BE a goalie, Clint Dempsey is a warrior hero and everyone loves the coach Bob Bradley. That, plus Donovan playing the role of leader and big brother and the US is the team everyone wants to go so far. Donovan is also reaping the benefits of the Nike Curse.

And the way it’s set up it is so legit that they CAN go that far. They play the Ghana “Black Star Sex Machines” on Saturday (2:30 PM) and provided that they can get past them (50/50 shot really) they cruise into the semifinals to face either Paraguay or South Korea. And if they get past them….. well let’s not get that far. If they DO get into the semis, ESPN will start demanding access into the US camp, everyone goes absolutely bonkers and watches constant updates on Landon Donovan’s every waking moment. Jeremy Schapp will stand outside in a field and say that “Donovan woke up this morning, ate breakfast and the mood was calm.” And the question is is that can these guys deal with THAT kind of pressure? They play with the idea of proving everyone wrong, but what happens when the underdogs become the favorite pick? This will be fascinating in many ways and as much as I love the “black stars” I really want to see this all play-out.

England: The English Press makes everything I do easier. They write articles about manager Capello being undermined, they prepare to crucify Wayne Rooney and John Terry and now that they’ve won it’s all BRING ON THE GERMANS and WE GOT THIS. And I love it all; you get a team that has a ton of personalities, access to hold press conferences anytime they want it seems, a weird coach, mannequin Beckham just standing around, immense pressure on them and all they really needed was a couple of beers to loosen up.

England has Germany next in the knockout. The English want this one very bad, as they have massive self loathing about Germany. Germany plays the brick wall in this; they are England’s kryptonite and you look at 1970 (England lose 3-2), 1990 (England ties 1-1 but loses 4-3 in penalty shootout), 1996 (England… you get it but it was also on penalties) and EVERYONE’S scared of Sunday (10:00 AM) when the game starts. They have a better lineup in place, seem to feel better and you the viewer secretly want England to win because they will face the winner of Argentina/Mexico will will probably be…

Argentina: Playing like a hairy, freewheeling MACHINE, Argentina is a biker gang, just doing whatever they want, handily beating up on teams and showing off their non-gay love. They have Lionel Messi, best player in the world basically just handling the ball, scaring the opposing defense and passing, they score from multiple people and even their coach can step in. Speaking of my friend MARADONA, after Argentina’s beating of Greece on Wednesday the man felt that Messi got a little too roughed up while winning. “Every time Lionel had the ball they brought him down. What are we playing then? If the first person to kick Messi got a yellow, then no one would touch him.” Well, WHAT ARE WE PLAYING?

Like I mentioned before, Argentina plays Mexico, who had trouble with South Africa (1-1), beat a French team (2-0) that self-combusted at halftime and LOST to Uruguay. Argentina will get past Mexico barring something weird, which means two possible outcomes: Argentina vs. Germany (a battle of bikers vs. robots) or Argentina vs. England which also has a rivalry that I have mentioned in passing. You WANT to see England/Argentina for this reason.

In 1986, Diego Maradona’s Argentinean team faced England in the quarterfinal game of the World Cup. Maradona scores on what was the clearest handball ever and no ref calls it. Argentina wins, their people name the shot “the hand of god”, Maradona becomes MARADONA, England feels like the US did after Slovenia but worse because England got KNOCKED OUT of the tournament. England has never ever forgotten it, which is what happens when you haven’t won the tournament since 1996 and keep running into the brick wall of Germany most of the time. If England beats the Germans, they face off against a team coached by the man who literally made a huge notch on his already prestigious career off of their country. The press conferences alone will be glorious.

Italy and France. Both GONE. Both hearing about it. The defending champion and the runner up from the last World Cup are now flying home, the first time EVER for this tournament. France we’ve gone over a bit, with the infighting and coaches and trainers storming off but Italy is the quiet confusion of this whole thing. Was it the newly hired manager? Was it the fact that they had too many old guys, not enough youth? The Italian papers are saying things like “Home with Shame” and “Lippi to blame!”, so it looks like everything will hang on the manager.

The African Nations: All grouped into one, the host country’s many representative teams sort of sputtered out or didn’t even leave the gate in this tournament. Only the Ghana Black Star Sex Machines remain in the tournament, facing up against the USA in some weird matchup where they will be the hometown favorite in the stadium and the badass, ultimate heel everywhere else. What happened to the Africans? Some of them had great showings and one bad game (like South Africa, who drew Mexico, won against France and got shelled by Uruguay, or Cameroon, who came in as a favorite and lost to Japan). Some teams screwed around with a proven formula (like Ivory Coast, who dominated the African Cup of Nations and then fired their coach). Others had bad luck (again Ivory Coast who’s best player broke his arm days before).

Hot Women Love Winners: Mexico because this is my way of saying goodbye to Mexico after the Argentina game.

Watch the teams I mentioned about. Back on Monday with everything that happened over the weekend.