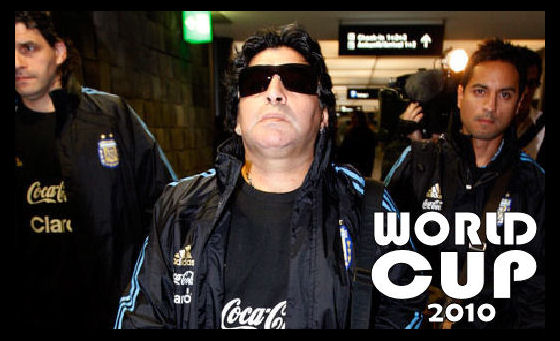 Broken Hearts, Pariahs, Soft Casts and Fear of Masks at the WORLD CUP OF TIES!!

I was told by Acadia that if this goes over well he will give me two tickets to South Africa for next week’s games so I have a lot of content for you! (ed note – I lied)

Awesome photo timeline of David Beckham’s journey from happy to diabolically angry during US vs. England from Saturday.

Since we’re on the Beckham subject, allow me to speak on him for a bit, as everyone I talk to about the Cup that doesn’t care about soccer asks about him. I presume that this is because of his marriage to skeletal Victoria Beckham and his foray into the MLS/America. Here’s my take: being a famous soccer player in England is almost a job that no one would ever take unless they love insane attention and thrive on immense pressure. David Beckham is/was one of those guys, at one point being one of the top searched names on the internet in the early 2000’s.

Beckham started out in the mid 90’s in England playing for Manchester United at 17 years old and in that time the team won 6 Premier League titles, 2, FA Cups and 1 Champions League. Because of this, England became giddy with him while also salivating at the prospect of taking him down (something about self loathing as a country/our culture wishing to build famous people up and then destroy them for daring to be famous in the first place). He got married to Posh, started modeling and it appeared that he flew a bit to close to the sun, culminating with him getting red carded (or fouling out) of the 1998 World Cup, which turned him from God to Devil. England hung effigies of him outside pubs, issued death threats, taunted him at games and the tabloids printed up a picture of him in dartboard form with the bulls-eye being the center of his face.

After all that, wouldn’t YOU begin to lose your care and passion about the sport you play? It’s no wonder why Beckham is now seemingly more into trying to make friends with Tom Cruise and setting up a post soccer career of being famous for nothing. He still cares (diabolically, as that picture montage above shows) about his homeland, but a part of him probably feels that as cool as it is to go to the game, it feels so much better to get a modeling contract based upon how swank he looked in his England 3-piece suit.

The “Group of Death” Started and got off to a semi-whimper, with Ivory Coast and Portugal playing to a 0-0 tie. Didier Drogba did not start, but came off the bench, wearing a cast on his arm. ESPN, always loving the entertainment factor did the “OMG let’s look at Ronaldo” piece, which is why I believe they hired Chris Connelly. Here’s the Ronaldo run down – scores goals, sleeps with Kardashians and Hiltons, gelled up hair, proud to be on the Portugal team. No mention of dramatically falling and pretending he was fouled, but, you know, culture of celebrity and all. Also it’s hard to root for Drogba and the Ivory Coast when they look like creamsicles.

Brazil beats North Korea 2-1 and LOOK AT THE NORTH KOREANS, ranked 145th in the world scoring a goal against the top ranked team! Oh yeah those North Korean fans all happy about that goal? Totally Chinese actors hired to cheer for the North Koreans.

The Netherlands (whom I assume are a threat) debuted against Denmark on Monday. What did we learn from this game? The Netherlands are pretty good, Denmark is not so much (losing in part to an “own goal” which is when you accidentally kick the ball into your OWN NET) and the Netherlands ROLL DEEP for the World Cup. Look at how much orange is in that crowd, if you can look past the hot girl. Speaking of women, these women were ejected from the match by FIFA officials for wearing those orange dresses, which officials alleged were worn to promote a Bavarian beer company.

Germany mechanically destroyed Australia on Saturday. Australia’s nickname for their team name is the “Soccerroo’s”. This is why Australia lost 4-0. Speaking of Germany, when you turn Australia’s goal into a shooting range, you can begin to talk shit about the other teams, most notably England. Fun fact for the German team: Their manager, Franz Beckenbauer is known as “Der Kaiser”.

Japan upsets Cameroon, 1-0. Keisuke Honda, goal scorer: “As a team we were thinking: ‘Don’t be down. Be positive. Go for it.” Words to live by.

The BBC, amongst other TV stations are receiving complaints about the vuvuzela. However, organizing chief from FIFA Danny Jordan said that “We did say that if any land on the pitch in anger we will take action. We’ve tried to get some order. We have asked for no vuvuzelas during national anthems or stadium announcements. It’s difficult but we’re trying to manage the best we can.” Basically, they aren’t going away.

YOUR Maradona quote of the moment:

“I have never been afraid of anything or anyone, unless they are wearing a mask.” – Maradona from Saturday’s post Nigeria conference.

I swear, this man will be INTERNET FAMOUS in this country if I have anything to do with it. There will be Facebook petitions created demanding that he host SNL. I’d also like to thank him for posing for this blog’s logo picture. Doesn’t he look like he could play an evil drug lord on Miami Vice?

Upcoming games you may want to watch/Tivo:

First off, I am making NO promises about games being high scoring anymore. This is the World Cup of Parity, so who knows what’s going to happen. Some people are saying that this is the crappiest World Cup since 1994 because of the low scoring, but one must realize that internally soccer is a struggle for every minute that the players are on the field.

Argentina vs. Republic of Korea; June 17, 7 A.M. EST. Lionel Messi was exciting in bursts in the last game, they have a much easier opponent in South Korea for this one and the best part: post game MARADONA press conference.

England vs. Algeria; June 18, 2 P.M. EST. Ok, remember a few paragraphs ago how I mentioned about the English tabloids being really hard on their national team? Well, the Robert Green failure has been debated all week by the press, with the fans and the media leaning towards substituting Joe Hart as the goalkeeper. Also, apparently Green’s mistake wouldn’t have happened had he not been playing with a broken hart. Breaking up is hard, especially when your girl looks like this. So, who will be the goalkeeper? TUNE IN AND FIND OUT.

USA vs. Slovenia; June 18, 9:30 A.M. EST. If the US can tie England, they can beat Slovenia. If you want to see your country win, here is a good game to watch. STILL not hyped? Would you be more excited if I told you that Weezer wrote a fight song for the team?

Ghana vs. Australia; June 19, 9:30 A.M. EST. Why, because Ghana has the best two nicknames ever (Black Stars and now SEX MACHINES) and Australia is the Socceroos. Root for the better nickname and you will always be a winner.

JW does a weekly podcast that is at both times awesome and better then awesome. Twenty9cast for direct download, or subscribe by searching your i-tunes for twenty9cast.