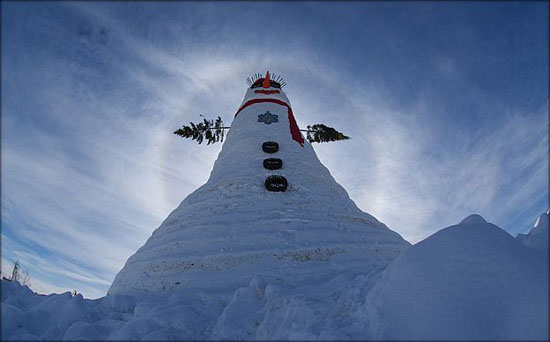 The “snow woman” towering over this village features eyelashes created from discarded skis and bright red lips made from painted car tires.  She wears a giant red hat and a 100-foot-long scarf, and her blond tresses are made from rope. She gets a little bling from a snowflake pendant that’s 6 feet long. “She’s a beauty.  Gotta love those eyelashes,” said Robin Zinchuk, executive director of the local chamber of commerce and a chief instigator of the town’s offbeat project. With the temperature in single digits, several hundred people including busloads of schoolchildren turned out for Friday’s dedication of the 122-foot-tall mountain of snow. This ski town of about 2,400 residents already holds the record for tallest snowman, dedicated in 1999. Since then, they have been waiting for someone else to break the record.  When no one rose to the challenge, the folks here decided they’d have to break the record themselves.

Read the rest of the article and see a bunch of cool pix after the jump!

Mark Bancroft, who donated the 150-foot crane used during the project, noted that it has been a tough winter with high fuel costs and nasty weather. “What does Bethel, Maine, do when it gets tough?  We build a snowman!” he said to the muffled applause of mittens and gloves clapping together. Although the snowwoman’s namesake was unable to attend Friday’s dedication because of her duties in Washington, a statement was read to the crowd. “I’ve joked that it’s just my luck I’d have a world record-breaking monument named after me — and it will be gone by summer,” the senator said. It took more than a month, dozens of volunteers and tons of snow to create Olympia.  Jim Sysko, a civil engineer, oversaw design and construction. To get an idea of scale, Olympia is about 30 feet shorter than the Statue of Liberty (without the base).  Her arms consist of 27-foot-tall evergreens. Her “carrot” nose, painted by schoolchildren, is 8 feet long.  Her eyes are made from giant wreaths. She was built with a series of concentric circles.  The crane dumped the snow into frames, and volunteers climbed in for long hours shoveling and packing the snow. “The best part of it is how everyone in town pitched in and made it happen,” said volunteer David Lynch. “It got hairy up at the top.  I only made it to 80 feet.” The final product is the talk of the town.  People especially liked the lashes created from old skis donated from the Sunday River ski resort. “It’s the whimsy of it all.  That’s what makes it so great,” said Iris Roberts, of Jefferson City, Mo., who watched with her husband on Friday. Angus was certified as the world’s tallest snowman by the Guinness Book of Records.  It remains to be seen if Olympia will get the nod as tallest snowman, or snow woman.  There’s currently no separate category for snow woman, so residents are petitioning for one. There was plenty of snow for the project.  Parts of Maine have had more than 100 inches of snow this season, unlike 1999 when Angus was built. Volunteers started with man made snow and then used snow piled on the runway of the municipal airport to finish the job. “People love it.  With all this snow, we did something good with it,” said Darlene Ginsberg, who directed traffic with one hand while holding a cup of hot coffee in the other. After the ceremony, local resident Julia Reuter stepped to the microphone and led the crowd in an impromptu sing along to the classic song, “Winter Wonderland.” In fact, more winter weather was on tap for Friday night.  Alex Kaufman from Sunday River credited Olympia for bringing the snowiest winter in 12 years.  Then he took a jab at Angus. “Angus didn’t bring squat for snow,” he quipped. “In this case, it took a woman to get it done.” 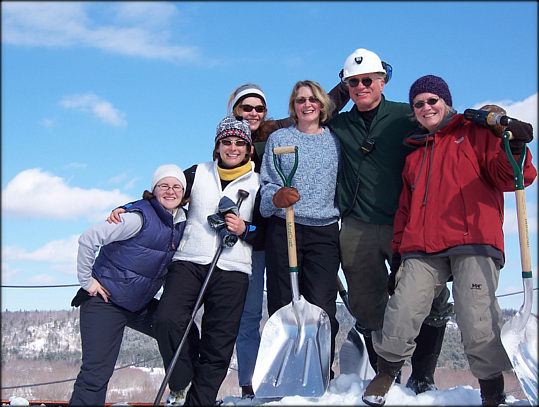 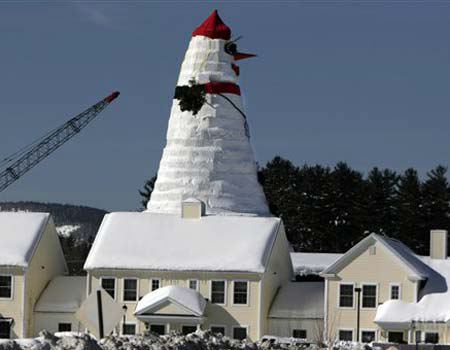 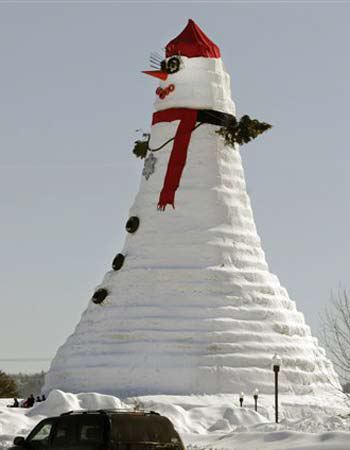 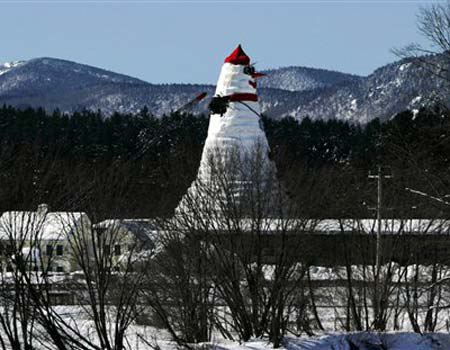 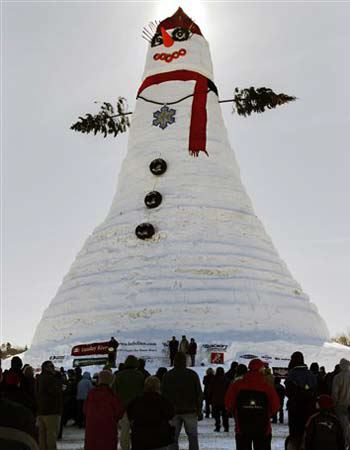 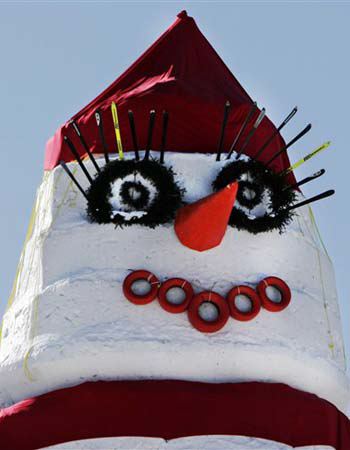 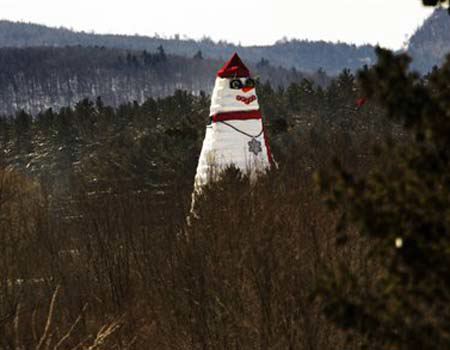 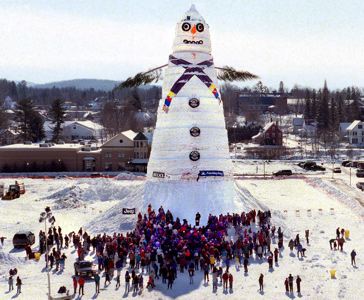 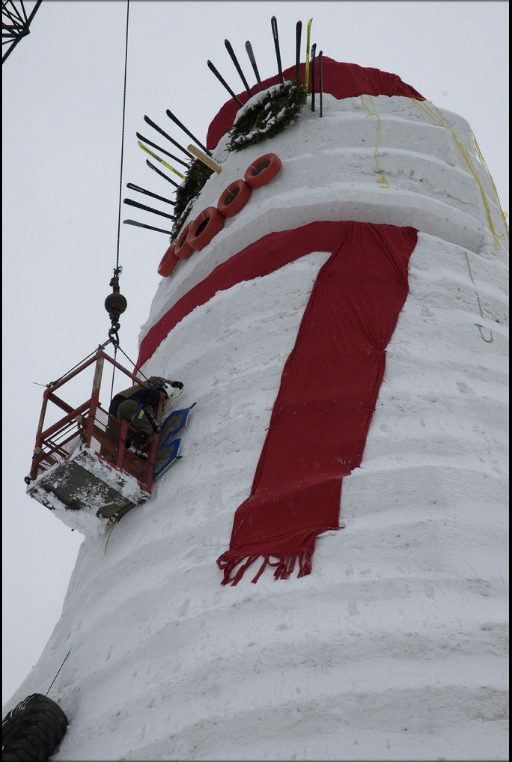 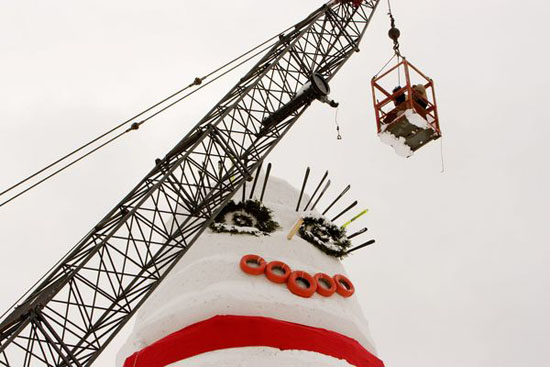 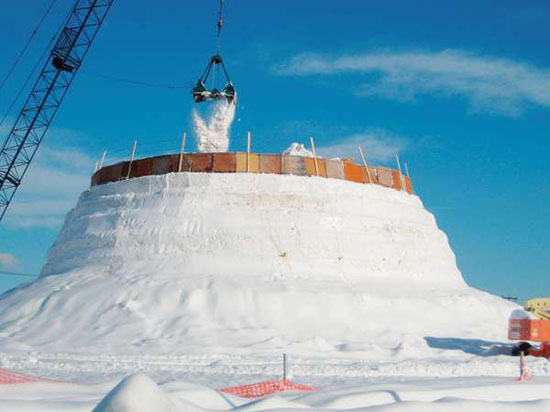 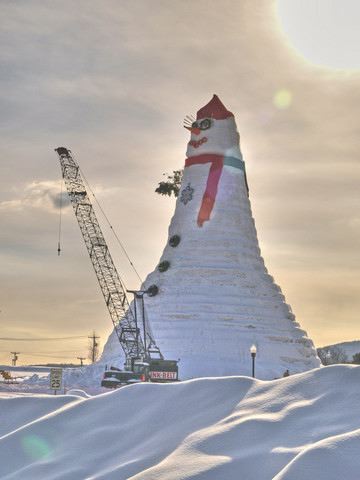 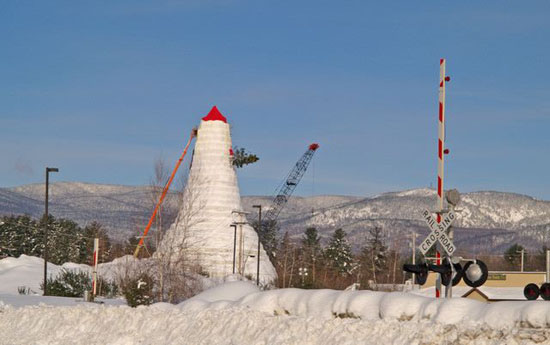 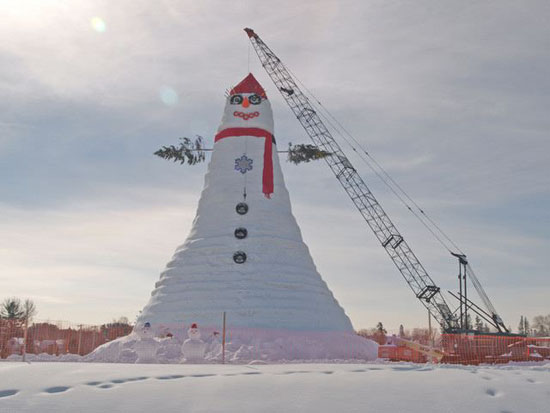 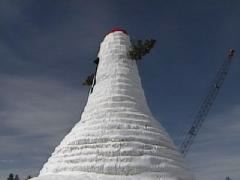 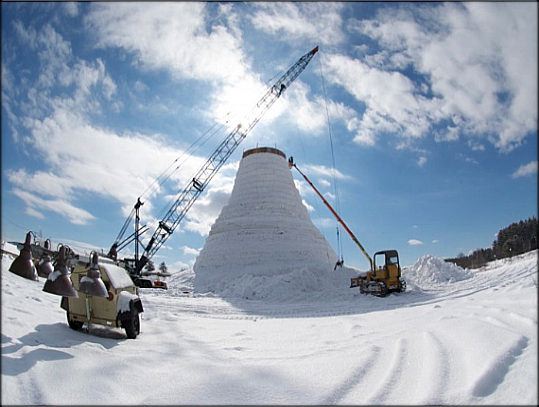 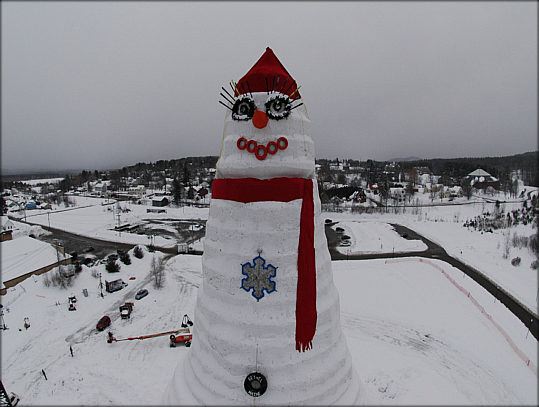 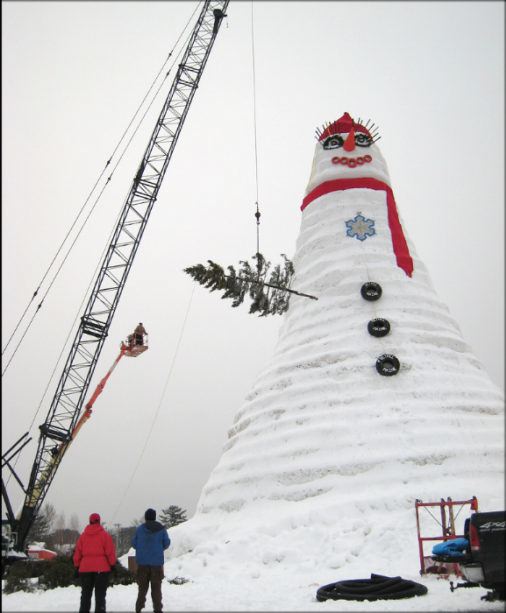 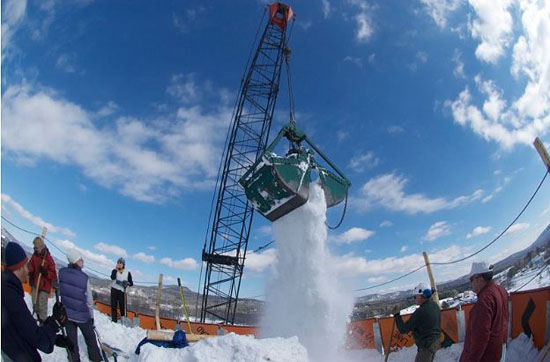 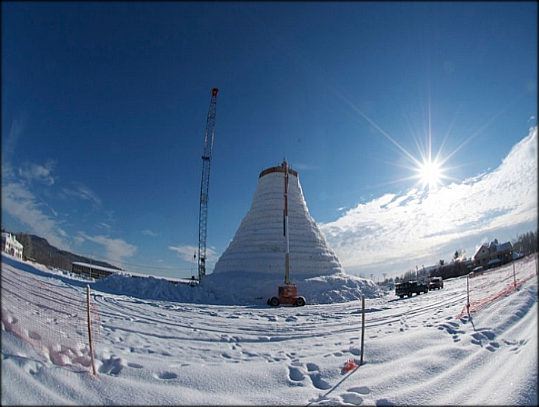