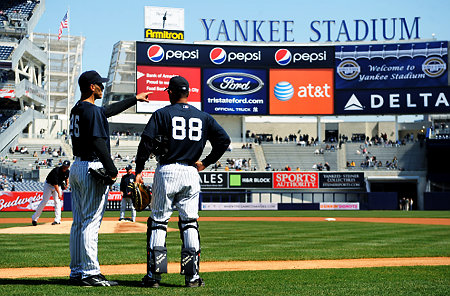 Of course, you won’t hear a lot of people in sports media ripping the New Yankee Stadium. Take SI.com’s Jimmy Traina, for example…

This is quite possibly the worst paragraph ever written for a Sports Illustrated entity. AND, I’m going to go out of my way and include the CNNSI short-lived television network.

The only thing that people say bad about NEW Yankee Stadium is that the prices are high. Well, news flash…the whole thing sucks. Watching the opener on television yesterday you barely get the feel that you are watching a game at the old stadium. Which, is probably the worst feeling you can imagine when watching a game at a new stadium. It makes not a damn bit of sense.

What do you say? Am I being too harsh on the Yankees and this was actually a solid idea to keep Yankee Tradition alive? Or, is this the most ridiculously awful stadium ever conceived? I’m sticking with the latter.