Would you like to see a clip from Michael Jackson’s last performance? 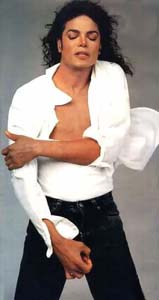 Then you might want to click here. I haven’t watched any FOX coverage on it, but 50-50 that Glenn Beck doesn’t believe he’s actually dead.

Here’s a nice touch, by FOX:

In the video released Thursday, the 50-year-old singer appears a step slower than he was in his twenties and thirties….

I think they might be on to something here. Sucks ER is off the air, or else they could have explored this phenomena. People get slower as they age? Especially when death is knocking on the door? You don’t say.