You just knew those biochemists were as good as dead… 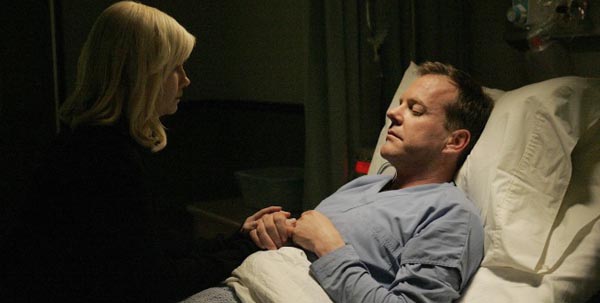 SHE AIN'T READY FOR YOU TO DIE, MAN!

I’ve actually liked this season of 24. I did not, however, like the season finale last night.

The best moment of the episode was clearly when Bauer jacked up those biochemists and just straight let them fools know they weren’t doing shit with his spinal fluid.

Spoilers and what have you after the jump.

The Tony Almeida stuff I felt wasn’t done bad, but it was one of those situations where it could have been a lot better. They went for the big reveal here in the finale where he was doing this for revenge, not to just kill FBI agents and all sorts of other folks.

I just wished they would have told us that like 7 weeks ago and fleshed it out a little bit more. It’s not bad as a plot line, it just isn’t as good as a plot twist. It just seemed too forced.

The rest of the finale was kind of lackluster. Way too much with the President’s daughter. That whole storyline could have been cleaned up a bit better and it really seemed that after the first part of this episode things really dragged.

Still, I think they set up next season very well.

First, the whole Kim going to save her dad thing was ridiculously obvious from like many weeks ago. I don’t blame them for doing it. Other than having killed off Bauer in an explosion, there wasn’t any other way to go.

Well, I guess they could have had Jack say, “Tony, you got the anecdote to this?” and then Tony goes, “Yeah, Jack” I have the anecdote. And hands him the anecdote.

Part of me was like, well, now Kim is going to die in the risky treatment. Jack will survive. That will be cool. We’ll see a new side of Jack. But, we wouldn’t. So, starting next season with Jack spending time with Kim and the new family seems like the way to go. Then, something to pull him away from that.

I would like to see Renee back, clearly. With her whole ending leaving her situation in the air, whether she would torture Coach Yost or not, there are several ways she could go there. I would like to see Jack pulled away from a new family life and playing the role Renee did from this season, with Renee going all Bauer on suckers.

Will Patton and Tony Almeida will escape. Why the fuck not?

They’ll get some more bad dudes and uncover some more conspiracies.

Although, at this point, I’d really just like they go back to some plots that were a bit simpler.