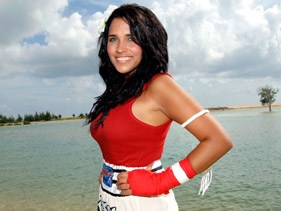 Flipping to the latest incarnation of Real World – Road Rules challenges, I’m about a dozen minutes late to the opening. A chick with her face painted is telling another broad, Shauvon, that her breasts are weighing the team down. Ten minutes in. Have they even had a challenge?!

In the opening segment, they pick the teams. Which is a twist in itself. When describing their attributes, 2 of the people describe themselves as having worked out specifically in order to train themselves for these challenges. Another, described himself as a “sleeper”, a term often associated with sports.

And this is why Bill Simmons and Dave Jacoby from ESPN have banged the drum to have these Challenges replace the NHL as our fourth major sport.

Not with me? You should be.


I haven’t watched a season of the Real World in years. Maybe a decade. Maybe more? Not because I’m one of those insufferable jackasses that go around with the clueless logic of, “I stopped watching MTV because they stopped showing music videos.” But, rather, the show just became horrible to me.

Well, those are most definitely not horrible. I actually watched a few episodes of the past Real World season simply because one of the ESPN guys I mentioned above referred to the actual Real World as a minor league feeder system to the Challenges. Dude was absolutely correct on that front.

However, none of the people from the most recent Real World have had their cup of coffee yet.

These early episodes are always a clusterfuck. We’re before any fights and competitions have taken place, so there’s just a mess of people and I literally don’t know half of them. So many of these people are interchangeable. But, there’s a married couple on there. A married couple where the man is most known, to me at least, for getting his face punched in on one of these challenges and sent home.

But, hey, holding it all together is TJ Lavin. TJ hits and introduces us to THE GULAG IN MOTHERFUCKING PRAGUE.

Unfortunately he tells the cast members that they are in the Czech Republic. The first competition should have been to state the actual country Prague was in. Probably would have eliminated too many.

He also tells the cast members he is a pro BMX rider. Which is awesome. It used to be weird on these challenges having TJ Lavin out there. But, frankly, he is the glue on these competitions. His catchphrase is “You killed it.” He pointed out on a podcast with Bill Simmons this week that he saves them up specifically for Simmons. Simmons then wrote 2000 words on how that moment compared to the 2004 Sox World Series.

They then hop on a boss and head to their castle. One cast member aptly compares it to a castle from The Sound of Music, then adds, “we’re gonna fuck this place up.”

One cast member then inexplicably says since we last saw him, he published a CHILDREN’S BOOK.

Later, they get to the boozin’, of course. The aforementioned boob weighing down fight all started from two of them being bombed and one refusing the others overtures to wrestle. Which then led to no fight, but, one of them to threaten to “kill you in your face.”

Eventually they get down to business. The challenge aspect. They’re broken into three teams. For the first challenge, they have to run into some sort of gas chamber. Not sure the nature of the gas, but, it’s making dudes cough and vomit slightly and generally struggling with breathing. Inside these chambers, they need to break some code. Which appears to be matching numbers and letters from one side of a board to the other side. So, some light reading and brief memorization.

They crack these codes to reveal maps, which leads to a puzzle the team needs to put together. These people reading codes and putting together puzzles is crazy entertaining. You wouldn’t think so. But, it’s not like normal people breaking codes and doing puzzles. Chaos ensues. The dude who wrote the kid’s book is actually prevailing and leads his team to victory while everyone yells.

Which leads to the two losing teams having to vote in a guy and girl to the GULAG.

The twist this year? Secret ballots.

Normally, the voting process is everyone choosing to gang up on somebody. Then that person just submits to the circumstance. Fuck that nonsense, this is CUTTHROAT.

So four people get voted in to this Gulag. There’s not really any backstabbing and conniving here in week 1 because, generally speaking, they want to get rid of the rookies first in these things. Why? Because they haven’t paid their dues yet. Who the fuck are these punk kids coming in here and trying to win MY money? I’ve been on a DOZEN of these.

So, yeah. BUT, before the GULAG goes down, they have to booze. Because everyone that is safe needs to let loose. Which leads to two chicks arguing over…some chick possibly/maybe stealing a pair of sweat pants. Awesome.

One girl completely freaks out and yells some dumb shit.

Then she gives an interview saying how she was just sitting back and watching the other chick self destruct.

Partially correct, as the girl she yelled at, Camila, started to cry. Camila, however, got her revenge in the GULAG. Wondering why I type GULAG in all caps constantly? It’s because communists don’t play games.

The first GULAG has them wrestling over these two rings. Brandon takes on some little dude named Derek. Brandon is funnier, so, I’ll pull for him to win. He does win. Because I don’t back losers.

On the girls side, the chick who got yelled at for jackin’ some sweats pulls out the victory. I was slightly rooting for her, because she was Brazilian. The loser goes out talkin’ shit on the rest of the cast. She didn’t want to hook up with any of ’em. Boom. roasted.

The competitions basically just saw them rolling around in dirt for a couple of minutes.

Kind of ho-hum on the challenges. Didn’t really like the gas aspect of the main challenge. Just got in the way. Instead of watching dudes gag on the smoke, I would have rather seen more clips of them struggling to read the puzzle. Didn’t really look like too many good fights from the clip of what’s in store for the season. Hopefully they swerve folks in that regard.