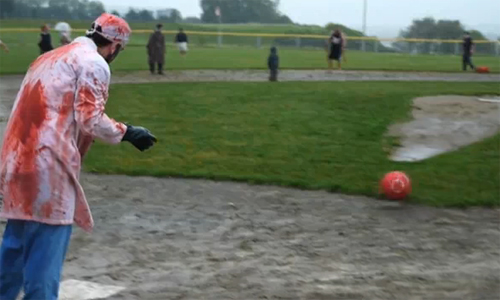 I read Strange Maine and I came across them talking about Zombie Kickball.  Now, I am wondering if there is like a Zombie kickball league?  Like, I am not sure how they would organize it cause zombies don’t seem to be very organizationally inclined.  But it’s a really good idea.  Have regular humans make the teams, do drafts, make up the schedule.

I guess you’d keep the zombies in some kind of…barn or something until it was time for the big game.  The visiting team would probably have to stay in the back of a big truck.  No sense having a bus since they don’t remember how to sit or anything.  But then when it was time for the game they could all get ready and the coach (who would not be a zombie) would get them out in the field and make sure the right one goes up to kick.  And there would be people packing the stands to see the game and there would be clever promotions and giveaways like zombie player bobble-heads and all the concessions would be blood and brain themed.  And.  Wait.

I just spent like 10 minutes talking about a zombie kickball league.  What the fuck is wrong with me?  Video of the game after the jump!