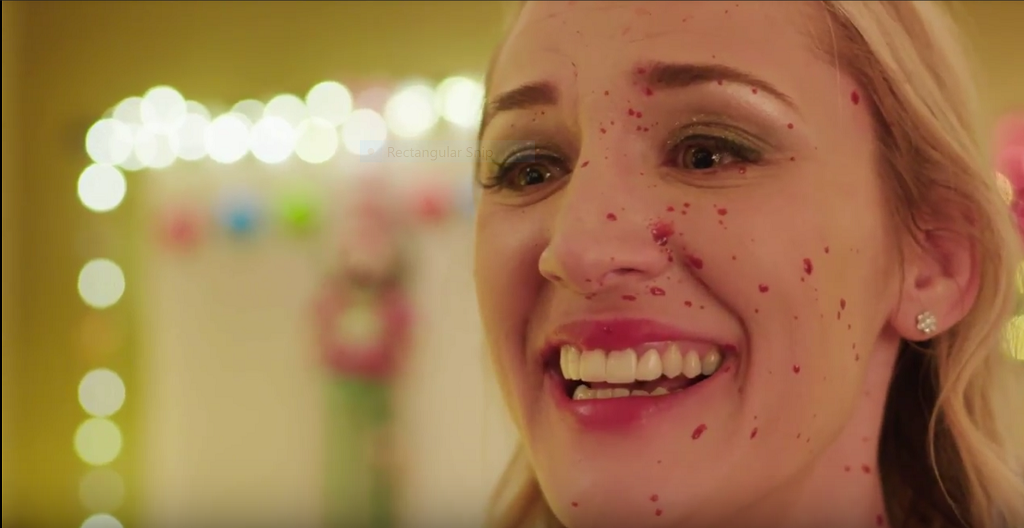 My first night at the Women in Horror Film Festival was great, as I stepped directly into the comedy horror short film block.  I will be doing an overall write-up of the entire weekend but I don’t want to go too long without being able to type:

I came to stab the Devil in the dick.

Which was one of my favorite lines of the night and the best line from “From Hell, She Rises”, one of the featured movies. I am glad comedy got included at all and was doubly glad that the room was full of people genuinely psyched to be there.  So let’s run through the films.

Ugh – I feel like a poser when I say “films”.  But whatever *puts in monocle*.  Oh, and when I say “scares” I am including fun gross stuff!  Let’s go!

This was a good premise.  Killer in sorority house clonking coeds with the main characters trying to get away.  The comedy part comes in when one gal tells the other to “run away when he comes for me.  He will come for me because the hot one always dies first”.

They had a couple directions they could have gone with it and the one they chose was great because the actress did a great job with it.  To me, a short film is either a solid premise that the actors sell or a flimsy premise that serves as a showcase for the actors.  This was definitely a premise film and it worked.

You know it’s good writing and directing when you think the actors are ad-libbing.  “Blood Sisters” has that in spades.  The premise didn’t make a ton of sense but it didn’t need to.  Suffice to say that two ladies performed a ritual and it didn’t go as planned.  Hilarity ensued.  It’s a testament to talent.

I am still stunned that I didn’t see the whole thing coming.  Seriously the whole thing is so clever and well executed that I was sucked in and then when the end reveal hit I felt like a dope in the best possible way.  No joke I was sort of mad at myself for being so surprised but then I forgave myself since I was simply the victim of a funny movie.

From Hell She Rises

This movie definitely felt bigger than some of the others.  Part of it was that it had a lot more characters, part of it was that it acted like a feature length movie.  Opening, titles, etc.  The thread of the plot in this one crossed me up a little, mainly because there was a double swerve which got me wondering about how the beginning was possible after knowing the end.  but then I decided I was overthinking it and just reveled in the pale red Suspiria style blood.  So much blood.

Oh, and:  “I came to stab the Devil in the dick” is going to be my catch phrase now.  Not sure how I will work it in but I will.  That is my pledge to you “From Hell She Rises”!

This movie was a pure delight.  Take one gal who hates Christmas and another who loves it and instead of doing some dorky “I will show you the true meaning of Christmas” thing, turn it on its head and do the Yuletide equivalent of water boarding.  Then you have yourself a quick funny movie that features two great actresses who really sell the concept.

This is another one that had a simple premise that I should have gotten, but I wasn’t mad because the ride was amazing.

This movie was straight up laugh out loud funny.  English dude builds a shed in his back yard.  His wife hates it.  Then is starts murdering people.  Not sure what’s not to like in that premise.  Honestly I want there to be a Blood Shed 2.  I even know how it would work.

I don’t know why British people are funnier than Americans would be in the same situation but they are.  And both the husband and the wife are hilarious.  Maybe they knew this was the best one and that is why they put it last.  If so, bravo, Women in Horror Film Festival.  “Blood Shed” is A+ funny.