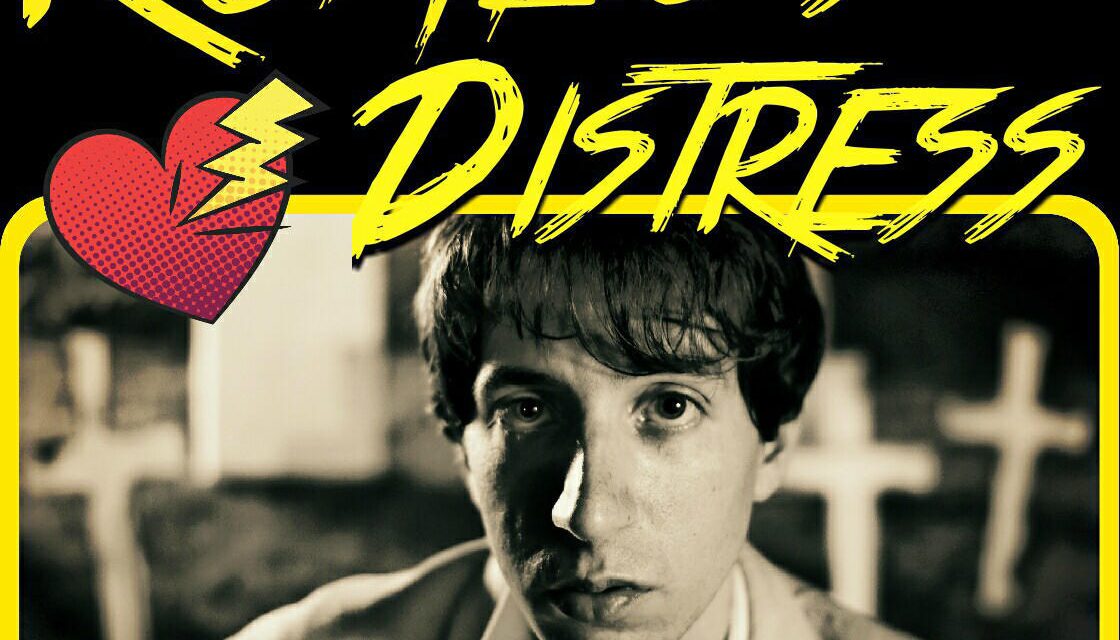 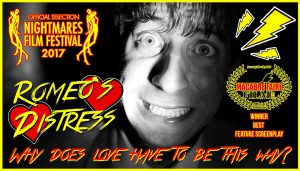 Romeo’s Distress. Where do I even start? This was definitely a rollercoaster of a film. Even as I write this I’m still trying to process it. First and foremost, this is a microbudget film. Jeff Frumess, who wrote and directed the film, managed to create a feature-length film, and a good one at that, for just over $2500. What he’s given us is complete bloody madness. At times I wasn’t sure if I was watching a comedy, thriller, neo-noir love story, or a psychedelic art house film. While not being quite as deliciously depraved as James Gunn’s or Jim Reardon’s early work, this is still a bizarre and unique film. Romeo’s Distress takes a tale of unrequited love and turns it into a violent and maddening story of one man’s redemption and another’s revenge.

The film starts innocently enough, showing a gleeful couple skipping, dancing, and being very much in love, all in the bright and beautiful colors of summer. Sadly, this is only taking place in the mind of James, played with wide-eyed innocence and mild creepiness by Anthony Malchar, and it quickly fades to the melancholy of black and white. It is here that we see the true oddity that is James Ferrose. Following him through a cemetery, taking pictures, sharing a lonely lunch with a statue, and doing his best David Lee Roth impression while singing about the “Cheesecake of Love”. This is clearly a socially awkward and lonely young man with all the trappings of the small town goth kid. Part of Romeo’s Distress‘ bizarre narrative lies in its ability to go from a bright and happy moment, shown as much on James’ face as it is on everything around him, and then bringing the desperate gloom right back. As much as the actors and color choices drive this truly odd story it is in the way that each scene encapsulates itself that the strangeness really takes hold. In nearly all films we are shown only the last few seconds of various daily tasks. This is a long-held film trope and there are hundreds of examples for it. For example, in a mainstream film, you might see a character purchasing a car but you would only see those final seconds, signing the contract and taking the keys, and that would be all she wrote. In one of Romeo’s Distress’ more bizarre scenes, we are made to watch the whole process, two men just sitting across from each other during a sales pitch, all the way to the finish. This might seem like a mundane and banal moment to sit through but in this film, it only serves to make things that much more bizarre. It is through this type of back and forth that we are led through James’ story of unrequited love, revenge, and the inevitable redemption they bring forth.

As I have said before, please don’t take this next comment as a negative or condemning thought because it truly isn’t. This film is incredibly bizarre. There are definitely a few moments that feel as if they should be in a horror film but there are far more that feel like they belong in something from David Lynch. This is a film that strikes me as more of an experimental thriller than straight horror. Lately, this has seemed to be the M.O. for my reviews and I’m loving it. Romeo’s Distress doesn’t confine itself to a single genre. Like I said, there are a few horror moments in this film, with plenty of blood and violence, but there are even more thriller, drama, and purely psychedelic scenes that serve to reject the idea of pigeonholing it. And these scenes are not used lightly. Each one gives insight into James’ mind and motivations, the loss these characters have suffered, the manipulations used to bring undeserved revenge, and not a one is being used only for the sake of inserting a dash of strangeness. In a film with such a clearly surreal focus, it is these moments that truly show James’ panic and emotional breakdown. Whether it be James’ possibly imaginary Uncle Elmo, played with incredible craziness by Dave Street, or his childlike conversations with Sam, played with ease by Charese Scott-Cooper, or the short glimpses we are given of the Gravedigger chemist, each piece brings that much more insight into the strangeness that is James’.

And now, on to everyone’s favorite section, the technical bits. Just as a reminder, this is a micro-budget feature film that was shot for just over $2500. I was able to shoot my last short film, clocking in around 20 minutes, for $1500. To pull off a feature film on that kind of budget is incredible. Not only does it take a skilled writer and director but also a very dedicated crew. Jeff Frumess is clearly that talented writer and director and he has the support of a strong crew behind him to make him that much better. As an added bonus, his skills behind the camera as the cinematographer are on that same level. A key feature in making a black and white film, especially one that incorporates some moments of color, is making sure the black and white do not become washed out or too stark in contrast from each other when those scenes cut back and forth. All of the color work looks just as it should. In fact, all of the elements work together perfectly. The sound department did their job nicely, the editing is smooth, the special FX looks awesome, and the actors all performed well. As far as technical issues go, there really wasn’t any. My only critique would be the amount of time we spend with Sam. Between James’ quickly trusting and being completely comfortable with her and the time spent chasing after her, we don’t get to have enough time with Sam. Other than James, Sam is the most compelling of the characters. She performs her part with such sweetness, despite it being her part in the revenge scheme against James, that I really wanted to see more of her and less physically chasing her. Again, this is a phenomenal film that is truly bizarre and I highly recommend it, I simply would have liked to see more of such sweet manipulation.

Between the sweetness and hatred, the unrequited love and the unconditional love, the moments of calm and those of psychedelic mania, we are presented with a film that is truly strange, from an incredible writer and director. As I said at the start of this review, I couldn’t find myself in the right headspace to review it because I couldn’t decide where to start. Here I am with a brilliant and bizarre film that’s part thriller, horror, comedy, love story, neo-noir, and a completely manic hallucinatory micro-budget experimental piece of art. That’s a difficult place to start writing this from because I thoroughly enjoyed it and wanted to ensure that I did it justice but was still a little stunned by it. So, please, take a minute and order a copy of this beautifully bizarre film. It is absolutely worth every minute.